I first wondered in chat in #gentoo irc back years ago when would pcie be looked at as a vehicle to store and retrieve from hard drives and bypass the bottlenecks built into SATA. Well it is wonderful I can report to have it working. I mean M.2 NVMe with PCIE 3.0 Sure there is a faster version. You can go ahead and pay for it if you like. Not likely I could see the real difference in any of my current usage at least. Perhaps if I were compiling Gentoo. But I would like to say thank you any way to those who made it happen and compliment them on a job well done.

The new system I built uses the following components;

That's as stated above a PCI-E 3.0 disk and for the board, disk and ram for a system like this. Each is selling for less than $100 US at the moment. A friend had several video cards and (perhaps because 4 years later the AC still hums without leaking) he had upgraded and sent me his 'old' RX 580 8 GB. I was more than happy to put it to use.

I opted for a Fractal Meshify C case and installed the Corsair 700 Gold I have been using for about 6 years now. It isn't modular but has been great. The case can accommodate water cooling if I decide to go that way and I never did give a damn about turning it into a strobe globe from a Friday night dance floor. Wire routing is nicely done in this particular case and it makes for a clean install and good air flow and heat exchange. The heavy power supply at the bottom of the case makes it more stable and less likely to tip. Of course having now eliminated spinning drives in the case. (no dvd) there is little chance of breaking anything if it did tip over.

'Pics or it didn't happen'? That little sliver of black under the video card....it's the heat spreader for the disk drive. 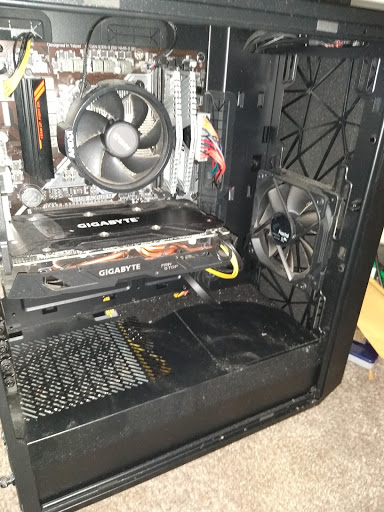 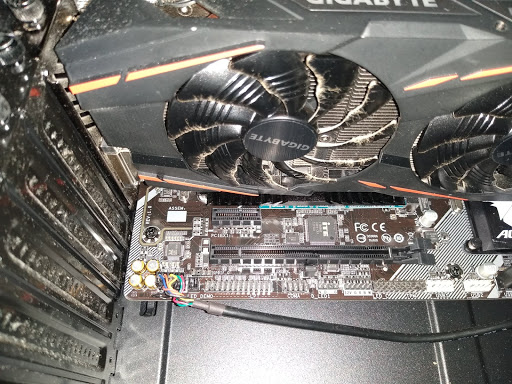 Posted by Olbrannon at 11:17 AM No comments:

You have to trust the source. Take for instance my daughter. She doesn't trust me to teach her math. Now she asserts and is backed by others that teaching is something not everyone can do. I have to agree with some qualification.

While organizational skills, lesson planning and a working syllabus are necessary to teach a course; it is unnecessary to explain a single concept or problem. From years as a math tutor I can say that in order to explain a concept one must thoroughly understand it.

What is often missed on the (her) part of the student is that work is required. I asserted to her that you would not expect a carpenter, mason or any other tradesman to work without a tape measure. So why then say to me "I do not like graphing." Graph 2 points and define the line. The solution to where two lines meet is often as easy to solve graphically as any other method. (Yes, I did assume they were in the same plane.) Parabolas, ellipses, circles... it matters not we can represent them and solve most questions (probably enough of them to at least pass) just graphing these things.

And it is so easy when you get to set the parameters. If I let x=0 and solve for y; then reverse that usually that yields at least 3 graph points. A couple more easy ones and usually done.

Trust me the work will pay off. It pays to dig a bit and verify especially these days. Years ago in a #Gentoo-chat channel someone commented that we were gaining so much information we would have trouble storing it at the current rate of expansion. My response was that we should be more worried about what we 'know' that is just flat ass wrong.

Recent events point this out to me very well as my own Mom who watches all the religious broadcasts faithfully swears to me 6 weeks before the presidential election that Biden will end Social Security. This while Trump makes the moves toward destabilizing the SSA. *SMDH*

Stay safe out there.

Posted by Olbrannon at 11:39 AM No comments:

Search the blog and links